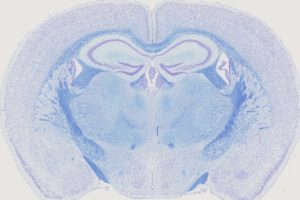 Coronal brain section of a mouse brain double-stained with Nissl and Luxol.

The identification of mouse NAP genes and gene networks offers a complementary resource to human genetic studies and predict that many more genes could be involved in mammalian brain morphogenesis and cognition.

Through data-sharing platforms, we are currently reaching out to medical community and ask whether the newly implicated genes we identified in mouse brain development (n=164) are associated with cognitive disorders in humans.

We are also investigating the role of gender specificity in neuroanatomical features by studying males and females independently. 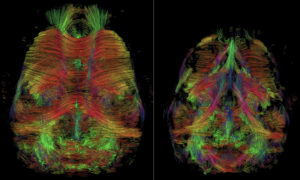 We are now investigating other WDR-gene mutations implicated in corpus callosum dysgenesis to determine whether common cellular mechanisms may be involved. 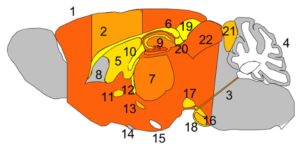 Cohen syndrome is a recessive disease caused by mutations on one single gene: the vacuolar protein sorting 13 homolog B (VPS13B) gene localized on human chromosome eight. Common clinical features include intellectual disability and postnatal microcephaly. Composed of a putative WDR domain at its C-terminal, VPS13B is a widely-expressed transmembrane protein and based on its homology to the yeast VPS13 protein is thought to function in vesicle-mediated transport and sorting of proteins within the cell.

In this study, our general aim is to improve our knowledge of VPS13B gene function in the brain and pathobiological mechanisms of Cohen syndrome in autosomal recessive intellectual disability as it remains largely unknown.

Schematic representation of the human 16p11.2 region showing gene content and order with items that underwent mouse studies in red.

Autism spectrum disorders (ASDs) are a group of complex neurodevelopmental diseases characterized by restricted/repetitive behaviors and a deficit in social communication. Affected children usually express autistic behaviors after  24 months of age. Human locus 16p11.2 is susceptible to a 600 Kb deletion (OMIM #611913) which is among the most frequent known etiologies of ASDs. This 16p11.2 microdeletion arises de novo and associates with brain size and other NeuroAnatomical Phenotypes (NAPs). One of the main challenges in the field is to be able to decipher which could be the causative gene of NAPs at the locus and how the genes could interact with each other to lead to ASDs. Here we set out to assess the neuroanatomical implication of each individual genes of the 16p11.2 interval using mouse mutants to inform the genetic architecture of this autism-associated locus.